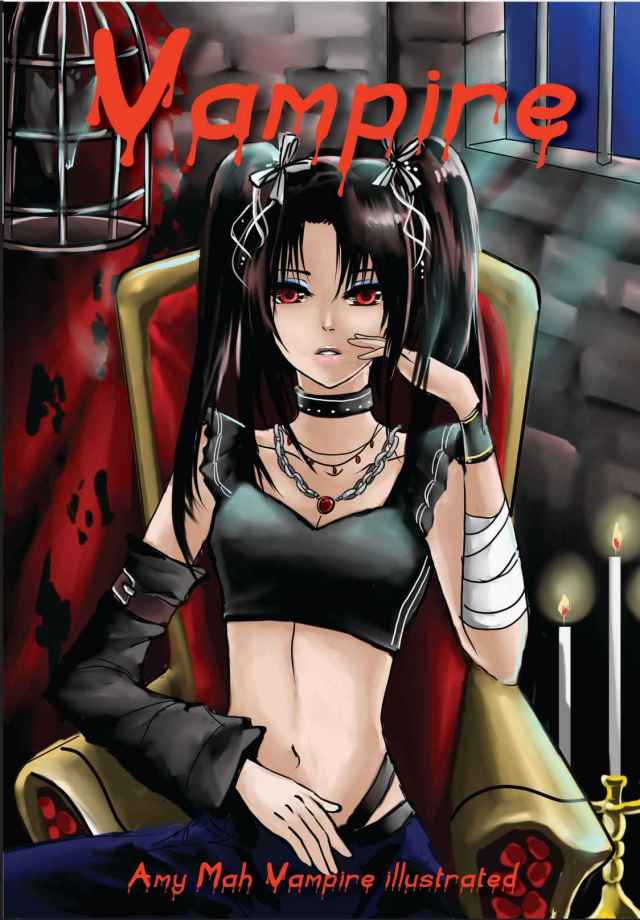 Buy it on Amazon: Paperback / Ebook

“This very funny vampire novel is very different from your normal vampire book and not just because it is bursting with full colour art fitted in with the text showing the life of a young vampire forced to walk about in a transparent nightdress all day without underwear because that is what female vampires are supposed to do! “The massacre on 22nd and 3rd was greatly exaggerated by the human newspapers and not altogether my fault. It was my very first hunting trip, and a girl should not be judged by her first bite night. And no one ever talks about me saving the life of that cat. Besides, most of them kind of killed themselves without any help from me….”

“Written with a very unique voice and style, this books starts a bit slow, but is well worth continuing – once the action starts, it’s hard to put down! A very fun (and funny), and very interesting take on vampires. I loved the non-human but relatable characters and culture that Amy Mah has created. The concept of vampires as a non-human species with very different instincts and expectations is rarely seen these days, and Amy Mah does it well!” Winged Wolf, October 8, 2014.

“Reads with a language a child in middle school could understand.” Michael, September 17, 2015

Take a bite out of this book!

“I enjoyed this book a lot more after reading the guide to being a vampire that is also available. This is a really funny book. I think that girls would enjoy it more than boys because the main character is a girl.” Amazon Customer, January 1, 2013

“Okay I’ll admit to not really being that much into anime. And this book very much fits into that genre. That initially interfered with my enjoyment, with the central character whining SO MUCH and the male vampires making Neanderthals look like Brad Pitt when it comes to gender politics. But…

After a few chapters the whole thing really grew on me. This makes for an original and entertaining “take” on vampires, as a distinct species who surround their lives with rules just to keep from killing each other (they are uber-predators). More, there’s the intriguing idea of some vampires being able to recall their more ancient lives, at least to some degree. Plus the whole thing has a neat sense of humor behind it. Coupled with something I love in fantasies–a sense the world is beyond the page. Like (for example) HARRY POTTER, this book gives the strong emotional impression things have been going on long before the story begins and that lots of stuff happens where we don’t see it. Not as easy or as common a think as it sounds!

True, a few characters (like the narrator’s Aunt) remain total cyphers. Which is a shame. And the sense of time feels off here and there. But I’m well and truly looking forward to the next book in the series!” David, October 31, 2012

Vampires With Bite And Edge

“Amy Mah has one hell of a way with words. Her characters are sharp, well thought out, detailed, and extreme in their own ways. The author also isn’t afraid to kill characters, something that I find a lot of other authors should think about. At any given point, you don’t know who is going to live or die. It’s like the walking dead with vampires instead of zombies! Read this well versed book now and enjoy the style, flare, and outright audacity of this amazing writer. Virgil Allen Moore, Author of Demon Vampire.” Virgil Allen Moore, April 23, 2013

Would Have Liked Better As Full Manga

“Brought to you by OBS reviewer Jessa

Pros: I enjoyed the fact that the author was trying to make it sound like the book was written straight from the main character and thus had a fresh and natural tone to how the story was told. It was very straightforward and how a story might be told if an actual real life by a rambunctious and moody teenage girl. I like the bluntly honest portrayal of each character as it made you feel like you actually knew the characters and would either love them, hate them, and maybe even give them a good smack upside the head at times to get them to calm down. I understand that the author wanted to make this story very real and personable and she definitely succeeded.

Cons: Some of the very things I enjoyed about this book, also made me despise it. The natural tone of a teenager can come across as immature and obnoxious. Which is reality, but I don’t really care to read an entire novel in this tone. Some of the dialogue
ended up feeling very jumbled and disorganized with typos nearly driving me insane. The manga drawings included throughout were cute, but made me feel like this book would work much better if it was switched over to actual manga form. I’m also a bit of a mythology/folklore snob and the portrayal of these vampires as fuzzy strange cats in heat just rubbed me the wrong way. I can appreciate a unique perspective on vampires (and thank goodness it wasn’t the sparkly nonsense at least), but the mash-up of old school movie vampires and a bunch of feral cat behavior just wasn’t cutting it for me. All in all, switch it over to full manga form and I think I’d like it a whole lot better.

A Fantastic Funny Take On Vampires!

“This is a great read a truly new take on the vampire myth, so very different from other takes of what it is like to be a teen vampire, and not just aimed at a teen audience as the situation comedy is for any age.” Nicholas Reardon, July 25, 2012